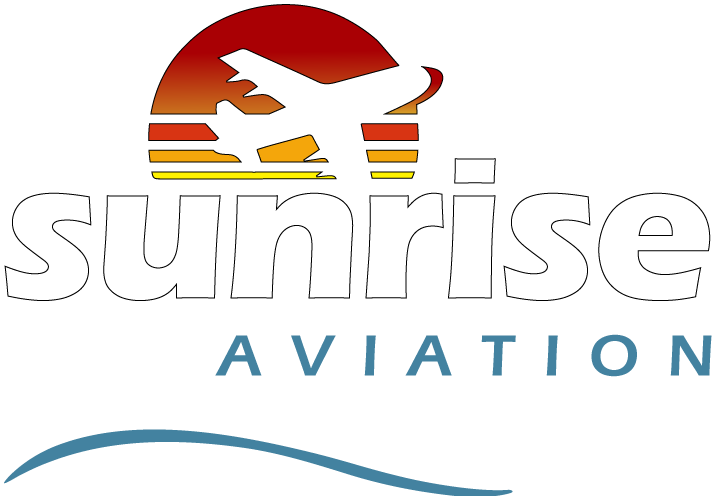 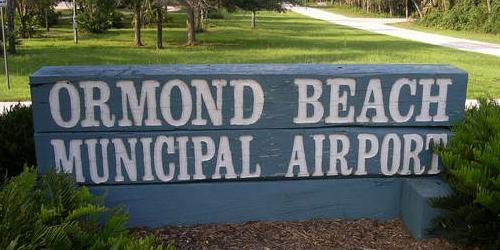 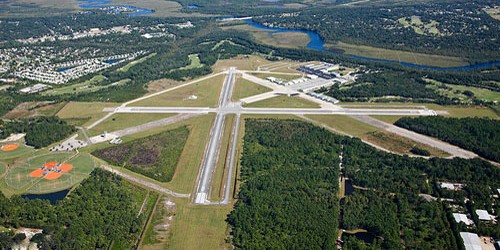 When you train at Sunrise Flight Academy, your home base will be Ormond Beach Municipal Airport located on the beautiful Central Florida coast!

Perhaps most advantageous for our students is our area’s excellent flying weather which allows our student pilots to fly some 350 days a year.  That means you complete your flight training in much less time.

With over 70,000 square feet of hangar, aircraft maintenance, flight planning and classroom space currently under lease at the airport, Sunrise Flight Academy is perfectly located for flight training!

A major benefit to our students is that Ormond Beach Municipal Airport does not have scheduled air carrier service, so training flights are not delayed because of airline traffic.  For example, nearby Daytona Beach International Airport is known for delays caused by heavy airport traffic.  When learning to fly, delays cost you time – and money.

Ormond Beach Municipal Airport is owned and operated by the City of Ormond Beach, Florida, and is located just east of Interstate 95, north of the scenic Tomoka River, and west of U.S. Highway 1.

Established in 1943 as a naval aviation training field; the airport was deeded to the city by the federal government in 1959 as a public use airport.  There are two intersecting runways, 4,005 X 75 feet and 3,702 X 100 feet, with six fully-lighted taxiways.  Approximately 170 general aviation aircraft are based at KOMN with approximately 127,000 annual operations (take-offs or landings).

Ormond Beach Municipal Airport is served by an FAA air traffic control tower which operates from 7:00am to 7:00pm daily.  Class D airspace surrounds the airport when the tower is in operation.

The airport is ideal for instrument flight training with VOR, GPS and RNAV approaches, as well as VFR training with quick access to nearby practice areas. 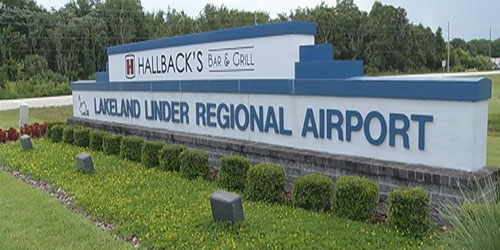 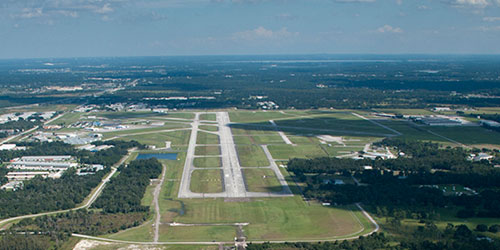 Sunrise Flight Academy is proud of our association with Polk State College’s Aerospace Program based at historic Lakeland-Linder Regional Airport.  The airport is internationally known as the home of the Sun-n-Fun Fly-In, an annual celebration of aviation and aircraft that takes place every spring.

Situated in the heart of Central Florida along the I-4 corridor, Lakeland-Linder Regional Airport is located on 1,700 acres with over 1-million square feet of hangar, maintenance and commercial space.

During World War II, Lakeland Army Air Field was home to a variety of squadrons of B-17’s, B-24’s, and P-51 Mustang fighter aircraft.  The airport is now owned and operated by the City of Lakeland, Florida.

The Lakeland VORTAC is on the airfield and all runways have high intensity runway lighting (HIRL) and P4L precision approach path indicator (PAPI) systems. Runway 9 is equipped with a Category I Instrument Landing system (ILS), a Medium Intensity Approach Light System with Runway Alignment Indicator (MALSR) and a published Cat I ILS precision instrument approach.

All other runways have published non-precision approaches. The FAA has also installed an Automatic Detection Surveillance Broadcast (ADS-B) ground station at the airport. 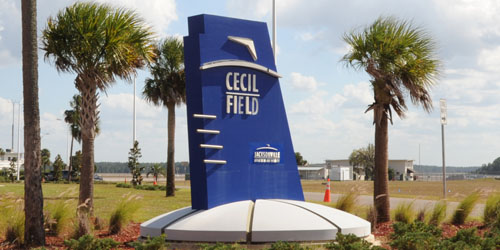 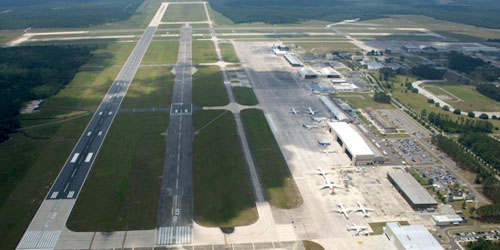 Though it is difficult to decide what must be on our list of desired characteristics for a “best airport for flight training”, most flight instructors and flight students can quickly list some of the worst:

Long taxi distances from parking to the active runway(s), long waits when you get to the runway as you realize you are # 10 for departure, high volume airline traffic that adds not only to the wait for pilots but to the stress put on air traffic controllers trying to direct a mix of different aircraft types and pilot abilities, unfriendly air traffic controllers, extensive nearby restrictive airspace like Class B, Class C, or even military airspace such as MOAs or Restricted Areas making it difficult not only to find suitable practice areas but also making it difficult to go direct to cross country destinations, busy practice areas that not only are sometimes a long distance from the airport but may also contain heavy transient traffic in addition to the local pilots practicing maneuvers, practice areas over unfriendly terrain or even water that would make an emergency landing difficult and rescue even more challenging, lack of nearby available airports for practicing including airports without control towers to add to the variety of airports needed to expand the pilot’s experience, Cecil Airport (KVQQ) in Jacksonville is an example of an airport that has very few of these unwanted traits. As a former Naval Air Station decommissioned in 1999, Cecil Airport has more ramp space and runways than you would find at a typical general aviation airport. While many GA airports rarely have runways exceeding 5,000 feet long and rarely have more than two runways available, Cecil Airport has 4 runways available configured in both north-south and east-west directions with lengths starting at 4,439 feet and one runway over 12,500 feet. Whatever airplane that you might have in your hangar, from a Cessna 152 to a Space Shuttle, you have the room to land at Cecil Airport. Since Cecil Airport is now designated as a spaceport, perhaps at some time in the future you will see the next generation of space shuttles depart from runway 18L or 36R. Helicopter operators will find 3 designated landing spots at KVQQ.

The array of runways and taxiways at Cecil airport nearly always provides for a short taxi to a runway suitable for takeoff. The FBO (Jacksonville JetPort) is perfectly located near the intersection of the runways.

Despite having fewer operations than many other airports with air traffic control towers, you will find the tower at Cecil Airport open for business from 7:00 a.m. to 9:00 p.m. every day of the year. The controllers at Cecil Airport, under the supervision of Richard Clark, provide friendly service to pilots of all types, from student to ATP and civilian to military, who operate in their Class D airspace.

If you are looking for visual excitement while you are doing your flight training, Cecil Airport can offer more than the usual models of civilian aircraft. The US Navy still considers Cecil Airport an excellent airport to use for pilot training so you will often find a Navy Lockheed P-3 Orion working the traffic pattern on one side with Cessna 172s on the other. US Homeland Security also bases several of their P-3s at Cecil Airport. Boeing does work for the military at Cecil Airport so an arrival or departure of an occasional F/A-18 Hornet is also possible. A few times each year, the US Navy will bring up to 50 T-45 Goshawk trainers to Cecil Airport for initial carrier qualifications. But with the large expanse of ramp space and the multiple runways, other operators at Cecil Airport are rarely inconvenienced even by this influx of aircraft. Other users of Cecil Airport include operators of airliners such as the B737, B727, B757, and A320 who come for maintenance work, painting, or even for major overhaul or conversion into a freighter. Helicopter enthusiasts will find the Coast Guard Dolphin helicopters that operate out of Cecil Airport interesting. If not, perhaps they might enjoy watching the CH-47 Chinooks, UH-60 Black Hawks or the OH-58 Kiowas operated by the Army National Guard.

Cecil Airport has a variety of instrument approaches including an ILS precision approach, VOR approach, and GPS approaches including precision WAAS approaches for each of the four runway directions. There is a VOR on the field and at times you may find an instrument student practicing a hold over the VOR at either 2000 or 3000 feet. Flight students working on their instrument rating will rarely need to go anywhere else while they are practicing. When students do need to go elsewhere, Herlong Airport is just 5 NM away and the busier Jacksonville Executive at Craig Airport (KCRG) is just 20 NM away. Even Jacksonville International Airport with its Class C airspace and multiple ILS approaches is only 19 NM away from Cecil Airport. Students needing practice at an airport without a control tower will find Herlong Airport inviting.

Word may be getting out about the great atmosphere for pilot training at Cecil Airport as the number of operations there increased by nearly 10% last year. But the airport has a long way to go before anyone would call it congested.

Florida State College at Jacksonville (FSCJ) has several aviation programs at Cecil Airport including pilot training. Sunrise Aviation is now the flight training partner for FSCJ and operates directly out of the FSCJ facilities and ramp at Cecil Airport. Pilot training at Sunrise Aviation’s Jacksonville satellite is FAA Approved under Part 141 and approved for VA benefits including Chapter 33, Post 9/11 recipients.